Southwest, Ryanair and easyJet are the only three airlines that retained investment-grade ratings from S&P Global Ratings, after the credit rating agency downgraded a host of carriers and slowed the pace of its air travel recovery forecast. In a report published last week, S&P analysts said that superior ratings come from the low-cost model, “robust liquidity”, and greater relative exposure to healthier short-haul and leisure markets.

What this kind of rating don’t tell us is that the superior ratings come mostly from immeasurable values which are beyond hard facts, things that drive sustainable growth and success, like leadership, culture, relationships with employees and passengers. This is what the unwavering success of Southwest is made of. Unlike any other airline, it has been profitable every single year between 1972 and 2019, and this year it tops the league of the most successful airlines in times of extreme uncertainty.

These are the kinds of things that cannot be copied or enforced by any kind rules. It is all about setting the overall framework and the right tone that radiates from true leaders. Herb Kelleher, ex CEO and co-founder of Southwest Airlines and his team have shown us the way and generously shared their experiences.

Here are some quotes from Herb’s interviews that I hope will be more deeply heard at this unsettled time. And more importantly, inspire so much needed actions to adapt to the new circumstances in the way that will speed up the recovery:

Herb Kelleher liked to say, “We have a strategic plan. It’s called ‘doing

things.” He never allowed himself to become bogged down by too much strategic thinking or analysis paralysis. He believed that all he needed was an overall framework. Nothing more. And he came up with something very basic. For Southwest Airlines, his vision and the basis for this framework was simple; low cost, superior service, people first.

"This framework approach gives a long-term horizon. It liberates from the contingencies of the moment. At a time when everything is created, deployed, and measured in real time, strategy and execution are one. Sequential thinking, which requires putting strategy first and execution second, is becoming more and more outdated, even irrelevant. Today’s business relies on a constant back and forth between the two."

"Because you can’t really be disciplined in what you do unless you are humble and open-minded. Humility breeds open-mindedness — and really, what we try to do is establish a clear and simple set of values that we understand. That simplifies things; that expedites things. It enables the extreme discipline. When an issue comes up, we don’t say we’re going to study it for two and a half years. We just say, “Southwest Airlines doesn’t do that. Maybe somebody else does, but we don’t.” It greatly facilitates the operation of the company. "

"When planning became big in the airline community, one of the analysts came up to me and said, “Herb, I understand you don’t have a plan.” I said that we have the most unusual plan in the industry: Doing things. That’s our plan. What we do by way of strategic planning is we define ourselves and then we redefine ourselves."

On leadership
“As far as leadership is concerned, I think that everybody needs to be a leader in order to have a successful company. Because everybody, by example, sets a leadership standard. I don’t care whether you’re checking bags or loading them in the bin or no matter what you’re doing.  You’re setting a standard for other people and we want people to all, all our people to be leaders. We think everybody is a leader no matter what their job is. We want everyone to be a leader. They’re setting an example by their conduct and they should be inspirational.”

On who comes first 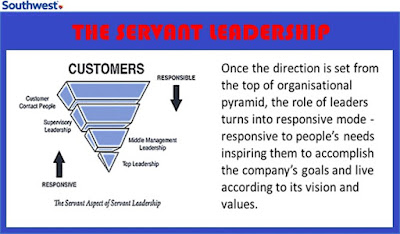 “We’re perfectly happy with having, generally speaking, the highest pay for employees in the domestic industry. They reward us with tremendous productivity, which lessens the effect. And the other airlines disadvantaged their people. I’m not saying they didn’t have to, in the sense of “either we do this or we fail,” so it’s not a criticism. I’m just talking about the economic effects of it.”

"The mission of Southwest Airlines is dedication to the highest quality of Customer Service delivered with a sense of warmth, friendliness, individual pride, and Company Spirit."

On learning it by doing it

"I learned it by doing it, and I was scared to death."

So, here we are, facing the biggest leadership challenge ever! The question is, can we get anywhere close to this kind of culture with minds stuck in the legacy world?

Of course, we can start moving towards it if we become open to rechannelling the work and information to their natural flow. The opening starts with the engagement of employees through creation of space for collaborative hubs and opportunity scans supported by latest technologies. These are the things that have been at the heart of my consulting work, that I have written and talked about and described in my book.