What is wrong with regulation EC261? Who is really responsible for its enforcement? Why is it disliked by both airlines and passengers? How much we can learn from it about how the system works, what doesn’t work, and what to do about it?

There is something unruly happening with regulation EC261, the EU rule set 15 years ago to ensure that passengers are compensated if their flight is cancelled or significantly delayed. Despite its age-related maturity, it’s ambiguity and lack of clarity made it increasingly disliked amongst passengers and airlines (*1). Also, it keeps resisting growing criticism of airlines, and is not working in line with ICAO core principles on consumer protection. As a result, the side effects of EC261 are getting worse, often hard to understand as shown in the following examples:
*       In the first week of September, Adria Airways had to cancel its evening flight from Ljubljana to Vienna after being informed that police in Vienna will ground the aircraft due to Adria’s refusal to pay 250€ compensation to an Austrian passenger after the passenger won the court case for a flight cancelled back in 2017. The whole story is not revealed but it is hard to believe that any airline would compromise its reputation for 250€ without a good reason.
*       In January 2016 the Judge at Reading County Court ruled in favour of two passengers in an appeal case awarding them with €600 (£450) each for the five-hour delay of a Monarch flight. The judge ruled that lightning strikes are not one of the ‘extraordinary circumstances’ that excuse airlines from paying flight delay compensation. The Civil Aviation Authority do include lightning strikes in their list of extraordinary circumstances but the Judge said in the ruling, that this list is not legally binding and has been proven wrong in court a number of times.
Do these real-life stories cause you any concern? You can find myriads of them on social media. Don’t they illustrate the absurdity of the mechanics of regulation EC261 where written rules rest peacefully in the official document, trapped in linear understanding of complex non-linear interactions that are happening in real life?
Identifying true reasons of flight disruptions do not belong to regulatory domain of this kind because of their intrinsic nature – they constantly change, interact, and are too complex to fit into the rigidness and prescriptiveness of institutionalised document. If EC261 is intended to assure passengers that they are looked after from above, while downloading the responsibility for compensating passengers experiencing flight cancellations and long delays to airlines even when they are caused by system issues, then it is not fit for the purpose it is intended to serve.

The damage is much deeper than what can be perceived. The legislation has incited animosity between airlines and passengers, as well as between airlines themselves, and caused confusion even at courts where the same reasons for delays and cancellations are understood and ruled in different ways. It has increased costs on all sides which will ultimately be paid by passengers.


At the very essence, most of the problems associated with flight delays and cancellations are caused by already critical airport and airspace congestion which is a collective, not a sole responsibility of airlines as this regulation suggests. Easing up the congestion problem can only happen by collective action organised by people who understand the functioning of the system from inside out.
To wrap up, EC261 is a by-product of the dysfunctional state of the industry driven by legacy paradigms. At the same time, it offers us a unique opportunity to see what is happening in real life, understand how disruptions relate to regulators, airlines, airports and passengers, learn from them, and do something about it.
The breakthrough will happen only when airline leaders decide that they are ready to see operational failures, understand their own relationship with them, and understand others. Without conscious awareness about strategic aspects of disruptions and collective damage caused by their neglect there will be no clarity about what really needs to be improved.
The question is, will airlines get the courage to face reality before another even more restrictive regulation is introduced to ‘protect passenger rights’ and ‘public interests’? Or will the privatised and monopolistic industry find the way to a sustainable solution that works best for airlines and passengers? To get there, there is some work to be done. It starts with understanding operational dysfunctions and their strategic origins for which we need the right combination of new technologies and insights to keep strategy and operations connected and do the constant fine-tuning. Isn’t this more natural than wasting time in proving regulations wrong while losing even the most loyal passengers?
Take this as yet another call to change the way you think and manage the airline business.
After all, none of us wants to keep doing the wrong thing. To do things right, however, we first need to understand where does the ‘wrongness’ come from. As said, there is the work to be done and it is urgent.
Are you a change maker or an aspiring one? Let me know if you are ready to act.


Here is how EC261 looks from passenger perspective: 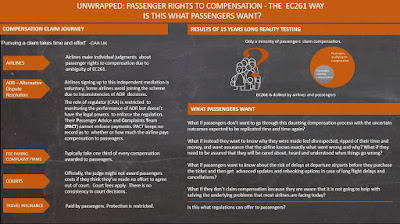