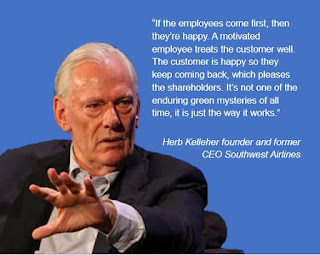 In his recent CNBC interview, the current CEO of Southwest Airlines Gary Kelly described the ingredients of company’s ‘secret sauce’ to competitiveness as follows:
‘We’ve never had a layoff, we’ve never had a pay cut, we've been profitable every single year since our first year of operation in 1972. There is a lot to a culture. And it is easier to have a strong culture if you feel like you are a champion. And that’s the way our employees feel. The other thing that we try to do for our people is to give them the tools and the resources they need to provide a product they are proud of. We don’t charge bag fees, we don’t charge change fees. And mainly, we care about passengers. And we try to have a family at Southwest Airlines and ask our people to treat all their customers like their guests in their homes, and it’s worked really well for us. Our people are fantastic. It really is what sets us apart competitively in the industry, and they are the ones that make Southwest so successful.’ (transcript)

Of course, everything doesn’t go smoothly all the time. Disruptions happen, flights are delayed or cancelled, causing inconvenience to passengers. Even giving the best possible service won’t make everyone happy. What makes Southwest unique is the attitude of care and best possible response in difficult situations.

And there is another thing. When faced by challenges, Southwest do make changes but don’t give up on their basic values. Their current plan to expand internationally and grab the market share of its conventional competitors American, Delta, and United requires investment in new fleet, rise in labour cost, and loss of additional revenue opportunity by not charging passengers to change their travel plans and to check their bags (‘bags fly free’ policy) - not a pleasing thing for investors. But Southwest resists change to the core of company values and view those still unique consumer-friendly policies as key elements of the company’s advantage.
The European way
For European low-fare counterparts this kind of ‘secret sauce’ to competitiveness is not on the menu. They are used to put the culture of growth in profit and market share before people and quality, assuming that by offering low-fares to their customers they free themselves from responsibilities related to travel mishaps, passenger anxiety and discomfort. Take EasyJet as an example. Their relationship with passengers is spiralling down, measured by service quality, on-time performance, and passenger claim processing, with lots of negative publicity. Things got worse since Gatwick, the world’s busiest single runway airport, became EasyJet’s biggest base following the fast traffic expansion. The consistent drop in punctuality from 81% in 2012 to 59% in 2016 illustrates the scale of mismatch between company’s strategic plans and reality. As a result, the airline has become more vulnerable to external events than other airlines facing the same difficulties. Still, EasyJet plan to ‘proceed with strategy of building leading positions at important airports in key summer beach and European city destinations’ putting market expansion before other values.
Unable to grow revenue and stay competitive while trapped at congested hub bases, conventional European airlines continue to buy growth through mergers and acquisitions. They keep reducing costs and improving productivity mostly by laying off people. And they don’t seem to be too concerned about a growing army of passengers experiencing unpleasant delays and cancellations. After all, their competitors do the same - European regulation on passenger protection can easily be ignored. Their records on service quality are partial and short of information about unpleasant consequences of flight delays and cancellations on customers. Airline delay reporting is voluntary, based on self-made flexible rules. Official delay statistics is therefore unreliable – the information is incomplete, inconsistent, and includes assumptions needed to make up for missing data. Reliable consumer reports do not exist.

Considering infrastructural limitations at twenty busiest European airports with no hope of expansion during the next two decades, disruptions are destined to rise and with them system inefficiencies, airline costs, and travel inconvenience.

There are suggestions that more cooperation between long-haul and low-cost carriers is on the way.  EasyJet and Ryanair, Europe's two biggest low cost carriers, see their future in serving long-haul airlines operating from European hub airports. This is seen as a cost-effective way for legacy carriers to bring their passengers to hub airports for long-haul flights connections. Major hub airlines have already surrendered around 40% of short-haul flights and have been forced to slash further their costs to offer rock-bottom fares to remain competitive. Lufthansa and Air France-KLM still prefer growing their own low-cost units to avoid giving up more market share to the external disruptors. There are many hurdles to be overcome before these arrangements take place. While passengers may benefit from lower ticket prices and more connectivity at hub airports, their travel will undoubtedly become more disruptive, even more costly in time and money, and filled with more anxiety, especially if responsibility for compensating passengers for missed connections is not clearly assigned. EasyJet’s experience at Gatwick offers some clues.

The good news is that the ‘secret sauce’ remains an option for improvement in culture and quality and with it increase in revenue and overall profitability. For those for who consider words ‘culture’ and ‘quality’ too abstract and overused, the impact of Southwest’s ‘secret sauce’ can be demonstrated in analytical terms through geometric progression. Say, for the sake of simplicity, that on the route between airports A and B an airline was carrying 1000 passengers before it improved punctuality and overall care of customers. As a result, total number of passengers was up by 10%, there were 10% more return passengers, and revenue per passenger increased by 10%. The airline benefited from 33% rise in revenue without additional investments and sales efforts. With the addition of cost saving through improved punctuality, the very real potential for improvement in quality to increase profit margin can be understood.

The way forward
Obviously, elements of Southwest’s culture cannot be introduced overnight. But even the smallest progress in motivating employees and treating customers well can bring the rewards relatively quickly.

Airlines with long history of hub entrenchment must work it out from bottom up, getting closer to reality. The fastest way to start this practice is by learning from disruptions, and digging more deeply into their self-inflicted causes. Disruptions are events where plans and management practices meet reality and become validated by passenger experience. Tracking their true origins at system level and understanding their impact on both passengers and overall business performance (as they unfold) is the key to improving competitiveness. And here is a hint – before making decisions, find out their impact on customers. Add to this an opportunity to insure against disruption losses equipped with well documented claims, and you will have even more reasons to look forward to better times ahead.

So, the remedies are available, surely more effective than regulatory interventions that may be on the way. Unlike regulations, they cannot be forced on airlines, they are something that airlines have to choose.
Posted by Jasenka Rapajic on Monday, January 16, 2017