Our personal boundaries governed by our experiences, beliefs, and habits can sometimes obscure our vision of reality and become harmful. This state was named the pike syndrome after the results of the following experiment carried out by Dr Mobius. 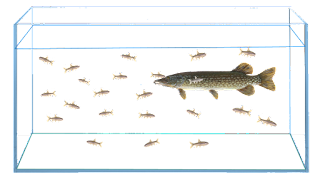 In 1873 a German zoologist Dr Karl Mobius conducted a famous experiment with a pike – an aggressive fish predator. Dr Mobius put a glass divider in the middle of a tank. On one side he dropped small prey fish, and put a pike into another. The pike started to charge the minnows. It charged over and over, and each time it would hit hard into the glass wall. It persisted even when impact was so strong that it would float upside down for some time before recovering and finally gave up after three months. After six months the glass wall was removed and the pike roamed freely among the minnows, peacefully sharing the tank. The pike survived by eating the food given by Dr Mobius. Other researchers have repeated Mobius’s experiment and results were the same. Some have actually allowed the pike to starve to death while minnows swam safely around.

To free ourselves from the pike syndrome we need to become aware of and question routines that no longer serve us before they put us in serious trouble. The same applies to organisations when their core business values are being unknowingly eroded by actions driven by inherited, ineffective habits and practices.

It's time for reality check.
Posted by Jasenka Rapajic on Thursday, February 04, 2016